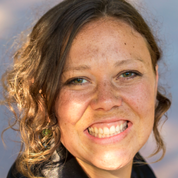 Virginia, CEO of Sylvatex,  has been involved with the development of the company’s microemulsion technology since 2000.  She assisted the founding chemist, late Dr. William Klausmeier, in laboratory testing and helped to develop the intellectual property portfolio.

Over the last few months, Virginia has engaged with the thought leaders of the petroleum industry and solidified a strong network of experts that support the technology and company market focus. Prior to this venture she managed the new development ideas for a Fortune 500 medical device company and led the US clinical and biomechanical research. Sylvatex has won numerous awards at industry conferences and venture funding competitions, including Silicon Valley LAUNCH and PortTechLA, as well as funding and support through Greenstart accelerator program.

Virginia earned her B.S in Chemistry and Physiology and M.S. in Biomechanics at the University of Oregon and is also active in Astia, Silicon Valley Leadership Group and San Francisco’s Biofuel Task force. Virginia was recently featured as one of the “Top 10 women in biofuels” and has recently been selected along with a small number of other female CEOs to be mentored by Sen. Feinstein.