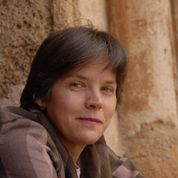 Castillo is an international expert on entrepreneurship and innovation. Born and raised in Venezuela, she became one of the country’s youngest researchers in biotechnology, and later moved to the corporate world, as head of research and development. It was at that time that she also started her first venture and decided to leave science to understand how wealth was created or destroyed.

True to her inquisitive nature, she pursued an MBA on entrepreneurship and discovered her true passion: fostering socioeconomic development through the creation of wealth. As a result, she pioneered the Venture Capital in Chile, where she lived for 6 years, founding the country’s first Centre for Entrepreneurship and later the country’s first Seed Capital Investment Fund.

She currently researches, writes and disseminates Wealthing ® systems around the world and supports philanthropic initiatives with regards to education, happiness, and domestic harmony.

A serial entrepreneur she has started 9 companies and 1 nonprofit and is an active angel investor. As a speaker and guest lecturer she visits 9-10 countries per year. She holds an Engineering degree and a Master of Science from Universidad Central de Venezuela, an MBA from Babson College, and a PhD (c ) from University of Western Australia in January 2013. In February 2012 she co-chaired the International Diana Conference on female entrepreneurship in Perth, Australia.