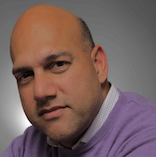 Salim is the founding Executive Director of Singularity University and spent two years building out this unique organization.  For the last year, he’s served at its Global Ambassador and has created relationships in over a dozen countries.  SU is based at NASA Ames and is training a new generation of leaders to manage exponentially growing technologies.

In 2007-2008, Salim was a Vice President at Yahoo, where he launched and ran Brickhouse, Yahoo’s internal incubator. His team analyzed over 3000 ideas around the company and launched four major products during his tenure.  His last company, Angstro, was sold to Google in August 2010. In all, Salim has founded or operated seven early-stage companies including PubSub Concepts, which laid down some of the foundational technology for the real-time web which he co-founded and grew to a $15m valuation.

After building and operating two other early-stage companies, in 2002 Salim founded the New York Grant Company as a response to 9/11. In its first year, NYGC attracted over 400 clients and delivered over $12 million of federal grants to the local economy. The company was built solely on cashflow and received innumerable accolades.

In 2001, Salim was presented with a New York City Award of Recognition by the Giuliani Administration, and in 2003 was nominated by Crain’s Magazine to their list of New York City’s “Top 40 under 40″ businesspeople.

He started his career as a software architect with CSC Europe and then joined ITIM Associates, a boutique consulting firm headquartered in London, as a business and technology strategy consultant. For five years, he led business restructuring projects for companies like Philips, NatWest Bank, Europcar, Whitbread, Carlson WagonLit and the UK Home Office. He finished by setting up the firm’s practice in France.

He is passionate about business, entrepreneurship, technology, skiing, wine, tennis and has a side hobby in metaphysics and philosophy.

Salim has traveled extensively, has lived and worked in eight different countries, speaks 2.75 languages and has an honors degree in theoretical physics and computing from the University of Waterloo near Toronto, Canada.