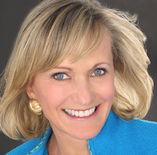 Talk Title:  Now, women have the power to change the economy … how swimming with dolphins will make the difference

Kay Koplovitz Founder of USA Network, and Chairman and CEO of Koplovitz & Co. LLC.  Kay Koplovitz is the Founder of USA Network, a company launched in 1977, and later expanded to introduce the Sci-Fi Channel and USA Networks International.  Ms. Koplovitz served as Chairperson & CEO until the company was sold for $4.5 Billion in 1998.  Presently, Ms. Koplovitz is the Chairman of the Board of Liz Claiborne Inc., a company that designs and markets an extensive range of women’s and men’s fashion and accessories worldwide.  She is a Board Member of CA Technology, the world’s leading independent IT management software company.as well as ION Media.  She has also served on the boards of Oracle, Nabisco, Instinet and General Re.

In 1998, President Clinton appointed Ms. Koplovitz to chair the National Women in Business Council.  While serving in that capacity, Ms. Koplovitz co-created Springboard Enterprises which was launched in 2000 to raise venture capital for women entrepreneurs.  Since its inception, Springboard Enterprises has raised over $5.billion in new capital. She is also the co-founder of Boldcap Ventures, a venture capital firm invested in early and mid-stage technology, media and health sciences companies.  She is the author of, Bold Women, Big Ideas (May ’02), which she wrote to inform and inspire women entrepreneurs to create wealth through equity. Ms. Koplovitz is a frequent speaker and contributor on media, capital formation, corporate governance and leadership.