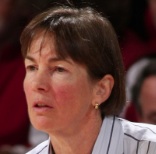 In a storied 31-year coaching career, Tara VanDerveer has established herself as one of the top coaches in the history of both collegiate and international women’s basketball.  Regarded in the profession as one of the most well-respected and dynamic coaches in the country, VanDerveer’s enormous contributions to the sport were recognized in April 2002, as she was inducted into the Women’s Basketball Hall of Fame in Knoxville, Tenn as well as the Women’s Sports Foundation Hall of Fame.

An ambassador for both Stanford University and the sport of college basketball, VanDerveer has enjoyed an unprecedented level of success through an energetic and positive approach to the game. A 10-time Pac-10 Coach of the Year, VanDerveer has accumulated an impressive 793-195 (.803) record in her 31 years of collegiate coaching. She has won two NCAA Championships and 18 Pac-10 titles, and led eight Stanford teams to the Final Four.

VanDerveer’s contributions to the sport of women’s basketball reach far outside the collegiate world. She became internationally known in 1996 when she guided the United States Olympic Women’s Basketball Team to the gold medal in Atlanta. VanDerveer led the National/Olympic team to an incredible 60-0 record from 1995-1996. Overall, VanDerveer has compiled an 88-8 (.917) record, including four gold medals, in eight head coaching stints with USA Basketball.

Her book, Shooting from the Outside , which chronicled her 1996 Olympic and National Team experience, was released in September 1997.