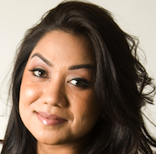 Title:  What You Don’t Know But Should About Young Entrepreneurs

Sumaya Kazi, 28, is an internationally recognized innovator, leader, speaker and award-winning entrepreneur.  She is the Founder and CEO of Sumazi, an intelligent recommendation engine and network that connects you to a powerful global network of people you don’t know but should.

Previously, Sumaya served as a Senior Social Media Manager at Sun Microsystems where she was responsible for the global strategy and implementation of social media across across multiple platforms. While at Sun, Sumaya founded The CulturalConnect.

Her team published 800+ interviews across 5 weekly publications of under-35 leaders that led a viral chain of meaningful connections and tools for mobilization of young adults across 100 countries.

For her passion and success around her endeavors, Sumaya has been recognized by Business Week as one of America’s “Best Young Entrepreneurs,” CNN as a “Young Person Who Rocks,” Silicon Valley Business Journal as a “Woman of Influence,” and most recently by UTNE Reader Magazine as one of “50 Visionaries Changing Your World.”

Sumaya has a strong passion for progress and has been deeply committed to the nonprofit community. She has served as a mentor for BUILD.org, a nonprofit social venture that empowers underprivileged and under-resourced high school students with an education in entrepreneurship. She is also on the steering committee for the San Francisco Muslim Women’s Giving Circle and advisory council for Jolkona Foundation. Sumaya graduated from the University of California, Berkeley and resides in San Francisco. You can learn more about her at http://www.SumayaKazi.com.